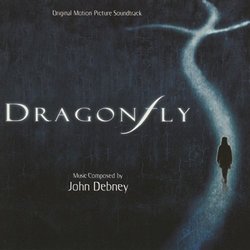 In Dragonfly, Dr. Emily Darrow is killed in a tragic accident in a South American country.  Her mourning husband, Dr. Joe Darrow (Kevin Costner) starts receiving signs that might he reach towards him from beyond the grave, pointing him towards something.  Are these signals real, and hinting that time is running out for something?  Might Emily still be alive?  Or is Joe losing his sanity through his grief?  The film suffered from flat acting and many contrived moments, but I found John Debney's orchestral underscore to be rather engaging, if not a little moody at times.

The soundtrack album gives you a nice overall taste of the score Debney has compiled.  From the dramatic and emotional "Main Titles", Debney sets the palette of the score, and the use of choir accents is a delightful touch.  The main theme is somber and moving, and makes consistent appearances throughout the album.  Some parts of the score don't really stick to the theme, and act as filler underscore, usually adding tension to a sequence, such as "Donor Body Awakens".  A secondary motif shows up there, an alternating major/minor chord sequence.  It is rather similar in tone to Hannibal and The Sixth Sense, it works well to set the atmosphere.  "Emily's Message Revealed" reprises the main theme as the choir soars, and the album comes to an emotionally satisfying conclusion.

One major flaw with the album is not with the score itself, but rather with the presentation of the score.  Running a scant 31-minutes long, this album feels a bit rushed.  There isn't enough time in the duration of the album to get through the emotional arc that the film was trying to represent, and as a result, it feels too short to be completely satisfying.  This is an unfortunate case where the score was far superior to the film, and yet the soundtrack release didn't do the score justice.  If you enjoyed the moodiness of the scores to Hannibal and The Sixth Sense, then you'll be sure to enjoy Dragonfly - but be warned that it might not be a wholly rewarding experience.