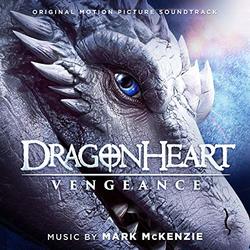 To coincide with the release of Universal's latest installment in the Dragonheart series, Intrada presents the CD release of Mark McKenzie's adventurous, magical, and often serene score for Dragonheart Vengeance. Although the story is propelled into motion by a tragic event, the score remains uplifting and mystical, telling the story of friendship and hope. McKenzie also deftly incorporates Randy Edelman's original, majestic theme from the first film into this latest score, ensuring continuity across the musical landscape of the series. He performed the entire score and produced this 47-minute soundtrack, featuring an electronic color palette of pan flutes, penny whistles, drums and percussion of every kind, solo cello, voices, harp, nylon guitar, plenty of fresh electronic textures and a great variety of traditional symphonic colors.

In the film, Jack Kane plays Lukas, a young farmer whose family is killed by savage raiders in the countryside. This horrible incident sets Lukas off on a quest of revenge, teaming up with a majestic dragon and a swashbuckling, sword-fighting mercenary, Darius (Joseph Milson). The film is directed by Irvan Silvestrini and is available on Blu-ray and DVD from Amazon.com starting Feb 4th, 2020.