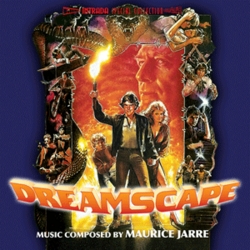 Although composer Maurice Jarre was well into his electronic scoring by 1984, none of his earlier efforts carried the wild musical imagination of Dreamscape. While producer Bruce Cohn Curtis (Hell Night) may have hired Jarre expecting the kind of rapturous symphonic score that the composer had provided for such films as Doctor Zhivago, he surprised with an electric-acoustical and altogether surreal soundtrack that was no less lavish, exciting or romantic. Jarre's stylistic choice likely far better embodied a high-tech trip into the subconscious than if the music had been performed with a full orchestra.

Jarre approached many of his electronic scores in traditionally notated fashion, but Dreamscape stands out for its level of improvisation. The composer collaborated on the score with longtime keyboardist and orchestrator Michel Mention and recordist, mixer, programmer, performer and source songwriter Craig Huxley, whose fascination with the instrumental state of the art contributed significantly to the score's futuristic sound. Instead of producing music that would impress merely with its experimental strangeness, however, Jarre, Mention and Huxley made a concentrated effort to create a "dreamscape" conjured from distinctive themes and motifs, an approach that gave even their most avant-garde musical sound effects a melodic component.

For this release, Intrada has remastered the album masters used for the original Sonic Atmosphere release from the 80s, punching up the sound using today's technology.