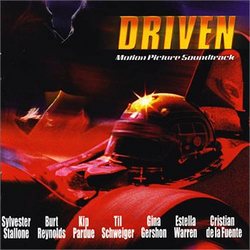 Not this soundtrack. I would never suggest that any album, regular poprelease or soundtrack, should sound the same through each song. It's a bit of asilly proposition anyway; most artists don't have just one idea that they cansomehow interpret in 15 different ways and actually sell to a record company.On the flipside, it seems to me that a soundtrack should really be comprised ofmusic that reflects the film in 15 different ways (or however many songs theymanage to fit on one disc).

The Driven soundtrackdoesn't have any flow to it. It starts out with Tantric's"Breakdown", a heavy, guitar driven song (no pun intended) withraspy, graveled vocals that makes me think the songs to follow are going tokeep me in the foot-tapping mood that I'm currently in, but they don't. Thevery next song is Jo Dee Messina's "Burn". It's difficult to go fromloud, pounding rock music to a sentimental, emotive track like"Burn"; the downshift is terribly awkward (pun fully intended)."Green Light Girl", the third track is a very Jimi Hendrix, 1960'sget-your-body-moving type of track. This is the kind of song a band would wantto open with at a show; get everyone up and going.

Again with the flow, the soundtrack goes from the above track to aLeAnn Rimes love song. Which isn't bad in and of itself, but I just know itaccompanies some lovey-dovey part of the film that more than likely has somekind of slow dancing in it (I'm thinking of "How Do I Live WithoutYou" from Con Air). And thatvisual pretty much ruins it for me. I will say this, though! The transitionbetween "Soon" and "I Wanna Get Back With You" is prettysmooth. In different words, both songs feature their vocalist reaching out withlonging arms to the object of their desire. Probably another schmoopy scene?

"Good Time" is an appropriately jaunty song, Leroy just wantsto be sure you're still hangin' in there. "Poison Well"? There's abizarrely mixed NIN, eastern feel to this one that works until the pseudo rapkicks in. "I'm Not Driving Anymore" employs the oft misused device ofmetaphor and does it pretty well with a cathartic, you've-broken-me sound."Satellite" the 9th track - I'll get to in a minute, I have myreasons.

Okay, look, "Mother" just does not work with the rest of this song selection.  It has a very Gregorian chant / Enigma vibethat I can't imagine fitting into a film like this. It just doesn't work forme. "Falling For Me" brings us back to the country arena. It soundsforced, though. The earnest voice seems out of place with heavy rock tracksreflecting a film about rough and tough racecar drivers. "Hang On" ishillbilly in that rock-fusion sort of way. It fits more than "Mother"does, I'll give it that.

Welcome back to the "heartland", your tour guide tonight isMike Curb. I mean really, these are good songs, but I'm almost annoyed thatthis album is stuffed with only sappy country songs - I suppose the obviousracing fan demographic would almost require it, though.

"For The Love of [All That is Holy!!] Money": the O'Jays didit better. It's a nice groove, but no. Last and certainly my least favorite, isSteve Holy's "Break On Through". I give him credit for taking on aDoors track, but again, no. Creed’s Scott Stapp would have been a better choicefor this mista- I mean undertaking; he can growl his vocals the way Morrisoncould.

This leads me back to "Satellite" by BT (Brian Transeau). BThas gained popularity the last six or so months and rightly so. The man can mixand spin with the best of the trance, dance DJs out there. His work tends to beon the hypnotic side, always backed by one emotion or the other. So, while heactually composed a lot of original music for the film (and it's upcomingrival, The Fast and The Furious),the producers only saw fit to choose one track for the album.  But it's quite a beautiful track. Even witha few well-chosen songs, the soundtrack overall is too jerky andaccident-prone. Caution flags all over the place.