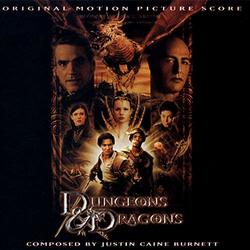 Performed by
The Western Australian Philharmonic Orchestra / The Northwest Sinfonia

It is one of the most successful role-playing games in history. Spawning plenty of spin-offs including books, computer games, animated television shows and more, "Dungeons & Dragons" finally spawned a feature length film. While primarily an independent production, the film starred Justin Whalen and Marlon Wayans as two thieves who undertake a quest to find the legendary Rod of Savrille, in order to help the Empress (Thora Birch) defeat the evil Mage Profion (Jeremy Irons). Dungeons & Dragons might have been a bit more that first-time director Courtney Solomon could handle, but for newcomer composer Justin Caine Burnett, the films visuals provided more than enough inspiration for a fully rousing and swashbuckling action score.

Beginning with "Opening to Profion's Dungeon", Burnett's score is immediately large and epic in size, utilizing a full orchestra and choir. Recognizable as utilizing a type of leitmotif approach, Burnett works the orchestra in a John Williams-inspired approach. In fact, many of the major themes remind me structurally of Superman - but only if you think of it that way. The main heroic theme for Ridley (Whalen) finally makes an appearance in "The Maze" - at which point we can't get rid of it! It's an exciting, brass heavy theme that adds the right flare of heroism to the events unfolding on screen.

The climax to the film is spread out over two cues running fifteen-minutes long: "Battle on the Rooftop" and "Fighting Profion". These are large-scale cues, and showcase Burnett's ability for commanding an orchestra. Considering that the climax was composed in only two weeks, this is rather impressive stuff. The score ends with an emotional resolution, but the film ends in a less than satisfying manner. Nonetheless, this is a highly enjoyable score to listen to. There is a "bonus" track: "This Is Not A Game" by Buck 250. I really don't think this song had any place in the film, let alone the soundtrack album. It's completely out of the blue, and doesn't fit in stylistically with the rest of the score.

The film was scored (actually, slightly overscored) with nearly wall-to-wall music, and the resulting album runs about 76-minutes long. That's about 73-minutes of score. Burnett trained under Hans Zimmer, but you would think it was John Williams given the nature and style of the music. Regardless of that, Burnett is definitely a composer to keep an eye on, and this score is one worth checking out - even though the film really isn't.