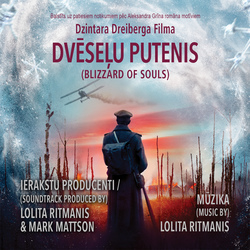 Dveselu putenis / Blizzard of Souls is a powerful film directed by Dzintars Dreibergs and produced by Inga Pranevska. It is the story of a sixteen-year-old Arturs, who enlists to fight in First World War with dreams of becoming a hero, but after surviving the brutalities of trench warfare and the loss of his family, he wonders if his efforts in battle were futile and if hope is only to be found in rebuilding a family and a home - as Latvia itself is born from the atrocities of war. Acclaimed composer Lolita Ritmanisp[[ recorded the score in Riga, Latvia - the birthplace of her parents. The composer assembled a 60 piece orchestra and 50 voice choir, and recorded the score at Latvia Radio 1.Studio, in the heart of old town Riga. The score is 1hour and 9 minutes in length. The album is produced by Mark Mattson and Lolita Ritmanis and the composer conducted musicians from several Symphony orchestras in Latvia.