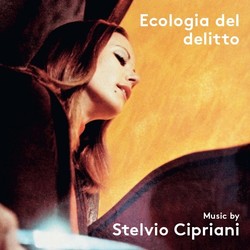 Like the majority of his thriller scores, Stelvio Cipriani contrasts beautiful, light melodies with harsh electronic guitars, emphatic drumming, and atonal sound textures. In Ecologia del delitto, tribal drumming, fuzzy electric guitar and bass, strident celeste, gentle pop rhythms, and yearning rhapsodic melodies work together to build a sonic environment into which the characters are placed, and the stark contrast between the impassioned lyrical music and the shocking, drumming tension music really gives Bava's visual storytelling a breadth of expression, excitement, and eloquence.

Italy's Digitmovies CD label first released 37 minutes of music from Ecologia del delitto in 2005, as part of a double album containing Cipriani's music from three Bava films. All of that music appears in this new expanded release from Chris' Soundtrack Corner. Eleven bonus tracks of about fourteen minutes' total length are added to this album, seven of which are previously unreleased—these include alternate takes, "wild" recordings, or edited mixes of original takes extended by looping the music and thus doubling the length of the track in order to offer a better listening experience. The cues are not sequenced in film order but have been placed in an order that we believe provides an optimum listening experience of the music apart from the film.