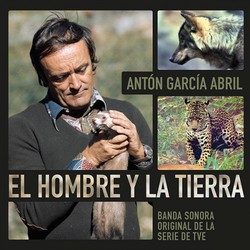 El Hombre y la Tierra (Man and Earth) was a television series about nature, presented and directed by naturalist Félix Rodríguez de la Fuente. It was originally broadcast from 1974 to 1981, interrupted when Rodriguez de la Fuente passed away in a helicopter accident while filming an episode in Alaska in 1980.

With a main theme that instantly became a pop culture classic in Spain, García Abril specifically wrote the music for several episodes, as well as a huge amount of reference themes to be used in others. Mostly written for symphony orchestra and chorus, the music includes echoes of Debussy and Ravel as well as risky experimentation between classics and pop—all handled with the composer's characteristic sound. El Hombre y la Tierra is one of the great epic soundtracks in the television music of the seventies.

After more than three years of work (including an exhaustive search for elements and rights clearance), this masterpiece of Spanish film and TV music, much requested by many fans around the world, is finally available. Carefully restored and mastered by Chris Malone from the best possible sources provided by TVE and the composer (mostly in stereo, with some cues in mono), this project has been entirely supervised by Maestro García Abril and produced by Miguel A. Órdóńez, who also provides detailed liner notes.