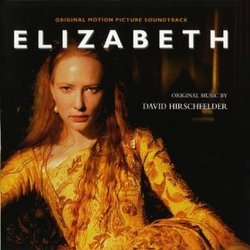 I was driving along, minding my own business, and pressed play on my CD player. I had just picked up the soundtrack to Elizabeth and was looking forward to taking a listen. The opening track began, and I did a double take. "Damn", I thought to myself, "I must have left in The Omen soundtrack". Ah well, I changed the disc on my CD changer. But imagine my surprise when alas, this was indeed the correct disc. So, it is true, the Virgin Queen’s main theme seemed to be sharing time with Damien’s cute little ditty, 'Ave Satani".

is the story of the England’s Queen Elizabeth and her ascent to power. I am, unfortunately, too poor a student of British History to say how accurate the film is. It is beautiful in concept and execution, however, even as it paints a fairly terrifying portrait of what life must have been like back then. We see Elizabeth as young lady, lover, clumsy new queen, and finally as the self-assured leader she became. Indeed, it appears by the end of the film that Cate Blanchet and Geoffrey Rush have been studying some Al Pacino films.

Don’t get me wrong, the soundtrack is strong. It’s strong, it’s deep, it’s dark, and at times it scared the living daylights out of me. Choral work on a score makes me a happy camper. I especially enjoy foreboding choral pieces, and the soundtrack for Elizabeth is replete with these.

There are sections of the score that take a break from this style of "scare the listener…well", and instead delve into somewhat lighter sections. These are primarily selections of the music that back up dances in the film. For this, Mr. Hirschfelder chose period music and period instruments such as harp and harpsichord. Even though these portions of the score are a nice break from the primary tone of the music, they never completely loosen up the atmosphere. They are not composed to be farcical, but romantic.

Authors will occasionally decide to begin or end their works with a quote from someone else, someone greater, and someone before them. These quotes set a tone or complete a circle for a story, give it context, and define it in one, quick motion. The quote that Mr. Hirschfelder chooses is Wolfgang Amadeus Mozart’s Requiem. He uses this to end the score. It ties in remarkably well with the rest of the soundtrack, and the segue is seamless. The scene in the film that uses the requiem as backup is when Cate Blanchet walks into the Queen’s Court, announcing, in white face, that she is married to England. The music used is entirely appropriate for the tone of the scene, but it is interesting to note that Elizabeth’s reign, which was regarded as a golden era in England’s history, is prefaced in this film with a requiem.

Altogether, this score is deserving of its Oscar nomination. It has some mighty stiff competition, and David Hirschfelder’s lack of name recognition (compared to a John Williams or Hans Zimmer) could help or hurt, but at the least, it’s a strong addition to any soundtrack collection. It is also great background music for (a) reading any book involving intrigue and deceit (goes surprisingly well with Tom Clancy novels), and (b) driving along with storm clouds threatening overhead. Just a couple of side-tips.

[Editor's Note: Hirschfelder had previously received an Oscar nomination for Shine, and a British Academy Award for Strictly Ballroom - so the name recognition isn't completely lacking!]