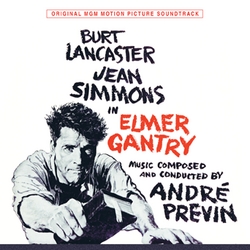 Andre Previn's score is almost a character in Elmer Gantry. It's a surprisingly short score, but it informs the film every time it's used. The "Main Title" is one of the most propulsive scene-setters in the history of film scoring, an astonishing virtuosic showpiece that sets the stage perfectly. While there are some standard religious songs sprinkled throughout the film, Previn never resorts to quoting from them in his actual score cues. In a career filled with brilliant scores, Elmer Gantry remains a highlight of his distinguished career.

Elmer Gantry was originally issued on an United Artists LP, and then on CD by Ryko. For this release, we've used the original three-track album takes, with much improved sound. There were occasional dropouts on the master tape, all of which were heard on the Ryko release—they've all been fixed for this release. Ryko discovered some outtakes, which they put into a bonus suite, but we found one outtake cue that they inadvertently left off. We've put the entire score in film order, including the outtakes.

We've also included the original album presentation, as well. Also included on the Ryko were a few other bonus tracks of the religious music—but they were included as acapella vocals. The original LP presentation included the instrumental tracks for "Shall We Gather At The River" and "Stand Up For Jesus." For the first time we've combined the vocals and instrumental tracks and present them as they were used in the film.

It gives us great pleasure to finally present the score as heard in the film, in clear, crisp sound. It's a Previn masterpiece.