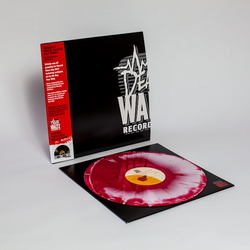 Remastered from the original master tapes.

Never say that Death Waltz Recording Company doesn't plumb the depths of exploitation (or in this case sexploitation) to bring you great music, with a treasure being unearthed in the shape of Nico Fidenco's score to Joe D'Amato's Emanuelle - Perche violenza alle donne?. Regarded as the best of the unofficial "Black Emanuelle" series, D'Amato's film starts off with the same sexual freedom and exploration as the official one but ends up descending into a hard-hitting voyage of human trafficking and sexual violence. Fidenco's music as presented mostly represents the character's exploration of hedonism and philosophy, scoring hook-ups with a truck driver and a couple of Italian girls, and as such is pretty free-flowing and upbeat.

The fantastic main theme is repeated throughout the album alongside some interesting supporting material, including some great offbeat percussion and some slinky melodies with a surprising amount of wind instruments, along with a subtle female voice. Synths appear frequently, along with the expected driving bassline, and it's not until the end when it gets darker and sleazier, as well as funkier in an almost prog-rock way. It's a fascinating end to a smooth-flowing record that reminds us that music to sex flicks sometimes needs more than just a wah-wah pedal.


Shrinkwrapped, Embossed & Debossed Death Waltz Recording Co. exclusive RSD sleeve with Obi strip featuring a 36 x 36 poster and a double sided 12 x 12 art print by We Buy Your Kids exclusively for this one off release.