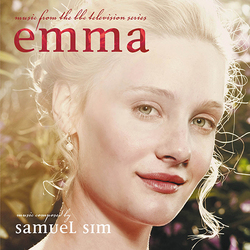 When Rachel Portman wrote the score for the theatrical feature film version of Jane Austen's Emma in 1996, it resulted in an Oscar for 'Best Music'. With the arrival of BBC's new television series based on the same Austen classic, the story is blessed with another award-worthy score, this time penned by another talented British composer, Samuel Sim.

His orchestral score for Emma is elegant, witty, romantic, beautiful and delightfully rich in emotion. Sim uses his catchy theme in many different settings throughout the score, and also introduces a number of secondary themes. Beautifully orchestrated primarily for strings, woodwinds, piano and harp, Emma is high quality British television music at its best.