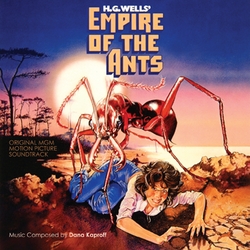 Empire Of The Ants

Kritzerland is proud to present a limited edition soundtrack—a world premiere release: Empire of the Ants with music composed and conducted by Dana Kaproff.

Empire Of The Ants is the first time a score to a film by Bert I. Gordon (affectionately known as Mr. BIG) has come to CD, and this is its world premiere release—in other words, this is a BIG event.

For the score, Mr. BIG hired a young composer who was just starting out, Dana Kaproff. Kaproff, who was 24, had begun working in TV, and Empire Of The Ants would be his first feature film score. Kaproff's orchestral score is quite effective, using repeated hammering notes on the piano, along with mysterioso string writing, excellent giant mutant ant music, and, as with the film, there's a sense of real spirit and fun to the score.

The CD is mastered from the original two-track stereo session masters and includes every note of music written for the film.