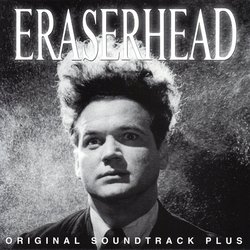 David Lynch's Eraserhead rests firmly at the top of that canon of American underground culture for which there is no genre. A staple of the dark underbelly of popular cinema that was originally only viewable at arthouse screenings or on the Midnight Movie circuit, Eraserhead is a truly unadulterated offering; and much of its sensation lies beyond the purely visual realm. The stark, dusty black and white images put forth are caked with and submerged in a dense jungle of industrial hums, buzzes, screeches and screams.

Eraserhead is a narrative made up of two intertwined veins: one of bleak and beautiful pictures elegantly painted in gray and black; and one of blankets of sublime, enveloping noise and static, the tinkering of Fats Waller organ rolls echoing in the background.

To lay in the dark and listen to this dizzying succession of blissful noise is a different way to get "lost" in the vast space of then the visuals of the film itself. It's no stretch to consider this soundtrack an experimental, early industrial masterpiece. Eraserhead's individual passion and personal tone shines through even in the thickest moments of fierce static, an audio undertaking that took Lynch and sound designer Alan Splet years to perfect.

Though Eraserhead's most famous piece of music is undoubtedly Peter Ivers' unforgettable, oft-covered haunting ballad "In Heaven," and the most exciting attribute of this edition of the soundtrack is no doubt its expansion; during the process of transferring the audio tapes, an unreleased recording from Ivers was discovered. It had not been heard since it was originally performed, over three decades ago.

After working for years to expose and foster the dark, brooding sounds that exist in the current underground, nothing could make us more proud than to share with our audience this, a new look at one of our most cherished influences; the soundtrack to David Lynch's Eraserhead.