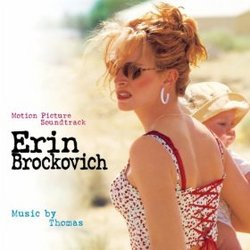 For the film Erin Brockovich, director Steven Soderbergh hired Julia Roberts and cast her in the title role - and the result was one of the best performances I've ever seen Roberts give. The touching story about a single mother trying to make enough money to support her three kids while at the same time investigating a contaminated water cover-up provided plenty of canvas for composer Thomas Newman to paint on. Fresh off of The Green Mile and American Beauty, Newman's approach to Erin Brockovich is both original and "standard". That is to say, some cues are instantly recognizable as having been written by Thomas Newman.

Beginning with "Useless", the score instantly throws you down to Erin's level: she's a poor unemployed lower-class single mother who can't get a job because she has an attitude. Employing a jazzy bluegrass approach to the theme, Newman conveys Erin's situation perfectly, and in the film you felt bad for her state of affairs. There are plenty of darker moments, such as "Chicken Fat Lady", where Erin discovers that the lady she used to leave her kids with has vanished - and the children were missing.

A rather melancholy cue, "Miss Wichita" accompanies Erin's story about how she was a beauty queen, and had all sorts of hopes and dreams that (sadly) never came to pass. In typical Newman fashion, this is a primarily piano-based theme evoking memories of The Shawshank Redemption. My friend who was in the car when I had the album on instantly said, "Oh - this is Thomas Newman, right?" He never saw Erin Brockovich, and didn't know what the album was. If that's not a testament to creating your own "style" of film scoring, then I don't know what is!

One of the more bizarre dissonant cues, "Xerox Copy" seems to be more of a jumble than a written score, but upon multiple listenings, it became quite clear that there was form within the cue. A rather tense moment in the film, this is where Erin is trying to copy documents from the Water Board to show that the chemical levels were too high. The film had a rather similar plot as A Civil Action, but was much better realized as the characters were more fleshed out and interesting to watch. Additionally, it was fun to watch Julia Roberts in this character.

There are two songs on the album by Sheryl Crow: "Redemption Day" and "Everyday Is a Winding Road". Both are upbeat and peppy, and perfectly complements Erin's character. Just when you think she's down for the count, she gets back up with a vengeance. Julia Roberts did an amazing job with that role, and it was truly a pleasure to watch her act in this film. I can only hope that she is not overlooked when the "award season" starts. Released by Sony Classical, the album runs about 35 minutes long, and is a satisfying listen. Newman's score isn't anything groundbreaking, but he continues to put out quality work, and that's fine by me.