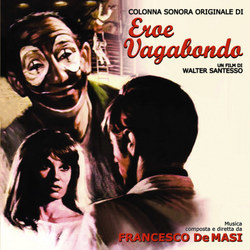 Kronos Records is proud to present for the first time ever on any format the soundtrack to Walter Santesso's (Paparazzo from Fellini's La Dolce Vita) Italo-Spanish film from 1966 Eroe Vagabondo. Music by the iconic Roman composer Francesco DeMasi (1930-2005)

The soundtrack of Eroe Vagabondo boasts a number of truly outstanding performers: the guitars are played by none less than Alessandro Alessandroni, the Maestro's assistant and close friend, who's guitar playing we know in innumerable films and Dino Asciolla; impeccable soloist who has performed on hundreds of works by the Roman composer, plays the viola. Maestro DeMasi conducts the Orchestra da Camera di Roma in this heart wrenthing gem, available to the public for the first time ever.

While listening to the 18 tracks on this CD, we can let ourselves be carried to the post World War II period. The main theme of Santesso's Eroe Vagabondo, which we find in many different arrangements in other tracks, presents a poignant and catchy melody, that is able to find a place in your mind since the first listen. But there are also great moments of love ("L'Amore di Noč") and rural Iberian flavoured atmospheres ("Terra di Spagna" and "Il Circo"). Moreover, having been born in 1930, the master knew very well that certain feelings were part of his life-luggage and knew how to express them in music with the same effectiveness.