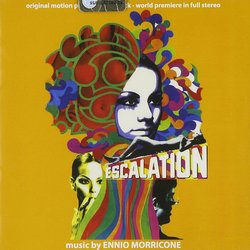 Digitmovies is proud to present the complete original motion picture score, for the first time in full stereo, composed by Ennio Morricone for the 1968 cult movie Escalation

Director Roberto Faenza approached Morricone to compose the music for his first film. Morricone always took enthusiastically the opportunities to work with first-time directors who were open to accept new musical experiments and to try out less controversial musical ideas. Faenza didn't have any idea regarding the score for his film, and so he gave Morricone total freedom. For this eccentric movie Morricone invented fresh ideas and new sounds never used in film before. The experiments included overlaying sound effects produced by the human mouth, throat and larynx, performed by Carlo Nicchio and by the composer himself.

This 40th anniversary CD edition contains the complete score recorded for the movie, thanks to the much-valued help of C.A.M., in whose archives the original recording session stereophonic master tapes have been carefully preserved. The score was first released on LP in 1968 (C.A.M. MAG 10.010) and re-issued later both on LP (in 1989, Intermezzo RP015) and on CD (in 1992, CAM CSE 053). The curiosity of our release is the first ever stereo appearance of this score. The main theme is an elegant bossa introduced first in Tr.1 and reprised in the longer end-title version (Tr. 17).

This new stereo version allows the listener to discover in detail the delicacy of the different sound layers (harpsichord, oboe, human voice, guitar, celesta, harp) that are overlapping each other creating a mesmerizing atmosphere. The notes of main theme re-appear in Tr.13, an almost giallo-like version full of tension. Given the subject of the movie and the period in which the story takes place, shake music cannot be lacking: we present here the original uncut version of "Dies Irae psichedelico" (Tr.2), a brilliant psychedelic shake based on the famous 13th century chant "Dies Irae" (often cited in Morricone's compositions), featuring the choir I Cantori Moderni by Alessandroni. Another psychedelic, almost barbaric shake is presented in Tr.15, using male voice, guitar, muted trumpet and dissonant piano and organ chords. Morricone elaborated several classical piece and popular period music and incorporated them in two musical collages (Tr.3 and Tr.8). The grotesque sound-effects produced by mouth appear in "Luca's Sound" (Tr.4), a musical idea that emphasizes very well the bizarre character of the protagonist. Sitar music (Tr.5, Tr.6) played by Alessanro Alessandroni and the psychedelic ritual pieces (Tr.10 and Tr.11) perfectly underscore the hippie sequences. A modern, bizarre madrigal (Tr.7), a sensual lullaby (Tr.9) and pieces for band written in jazz-style of the 20's and 30's (Tr.12, Tr.16) just add to the score's diversity, a true masterpiece from the Silver Age of Italian Film Music.