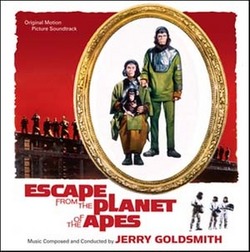 Escape from the Planet of the Apes

Finally! The only Planet of the Apes score to not have an album of its own finally does!

Jerry Goldsmith returned for the third film in Twentieth Century Fox's Planet of the Apes saga. For Franklin J. Schaffner's original classic, Goldsmith wrote one of the all-time GREAT films scores. Remarkable in every way and truly groundbreaking, there was no topping what he had done previously. So Jerry Goldsmith did what he always did in that situation... he wrote something completely new! And once again he soared!

For Escape From The Planet of the Apes (1971) Jerry miraculously brought Planet of the Apes to the 1970s and gave it a groove! That's not to say his original score didn't have plenty of groove itself, but in a very different way. Here he added an electric guitar, a steel drum and a sitar to his orchestra! And what fun it all was!

Roddy McDowall and Kim Hunter reprise their roles from the original Planet of the Apes in this third chapter of the Apes saga. Two intelligent simians from the future, Cornelius (McDowall) and Zira (Hunter) travel to present-day Earth. They become instant sensations, wined and dined and treated like celebrities—until a high-level plot forces them to run for their lives!

Previously available only as an abbreviated "bonus track" on our own Planet of the Apes CD, this release of the complete score from Escape From The Planet of the Apes finally plugs one of the of the most important holes in Jerry Goldsmith's discography.