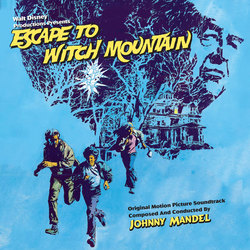 When composer Johnny Mandel was hired to score the 1975 film Escape to Witch Mountain, he had never scored a fantasy or science fiction film and certainly never a Disney production. Mandel scored the film for an orchestra of around 50 players, including Paul Beaver on synthesizer and harmonica player Tommy Morgan lending his talents both for source effects and musical lines and effects.

To accompany the film's stylized opening title sequence, Mandel composed an exciting piece of chase music centered around an ascending/descending title melody on high strings and woodwinds. The theme is supported by churning rhythms from low strings and pounding brass accents, guitar and tambourine beats—with braying horns to represent the dogs chasing the animated children on screen. In addition to the many exciting moments for strings and woodwinds in the score's numerous chase and action cues, Mandel also maintained a light touch in keeping with the film's Disney brand.

The scoring sessions were captured on 35mm three-channel magnetic film. While this was typical for the studio, less typical was the large number of 35mm reels recorded in separate sessions, intended for synchronization during the music mixing phase of production. This layered method of recording allowed the engineers access to twelve separate channels of recorded material, including reels for the orchestra, reels for the percussion (including harp, organ and vibraphone), reels for the synthesizers and, finally, reels for special "gimmick" effects that included harmonica and high-pitched electronic wails. After mixing everything for the picture, Disney then transferred the numerous disparate elements onto 2″ 24-track tape for long-term storage, where every individual layer of music survived in pristine condition, including all of the complex gimmicks.