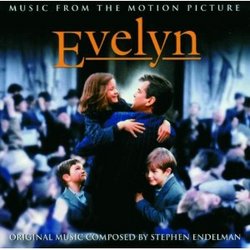 Directed by Bruce Beresford, Evelyn is a heartwarming tale of a single Irish father's struggle against the Irish government in the 1950's.  It is a well-made, though somewhat clichéd, tearjerker.  The music does its job in evoking the mood and emotions, but fails to create a truly unique feel for the piece.  Evelyn tells the true tale of Desmond Doyle (Pierce Brosnan), an unemployed single father who must fight for custody of his children after they are taken away from him.  This noble struggle led to a landmark decision by the Irish Supreme Court in 1953.  The film is unabashed as a heartwarming film, and it does the job well.  Beresford has directed much more serious fare before, so some of his fans might be taken aback by the relatively easy nature of the work.

The soundtrack, by Stephen Endelman, is mainly a mixture of standard movie orchestral fare and Irish folk music.  The music does do a good job of evoking Ireland, and, like the film overall, is unabashed about tugging on the audience's heartstrings.  There is a bonus of "Sitting On Top of the World" by Van Morrison, which turns out to be one of the more engaging pieces.  In addition, Brosnan actually performs in two source cues.

For the most part, the soundtrack is fairly tepid in its ambition.  In listening to it, one feels he or she has heard the music somewhere else, given how non-descript it is.  No distinct motif or theme is presented, and because of this flaw, the soundtrack seems disjointed.  It feels more like a collection of separate pieces, as opposed to one coherent piece or theme-based work.

In conclusion, it is tough to recommend this soundtrack, given its non-superlative nature.  The music is not of poor quality, it is just neither unique nor ambitious, and other soundtracks deserve more attention.  I could only speculate that some Pierce Brosnan fans might want to pick up the soundtrack for the sheer novelty of hearing him sing, and the Van Morrison song is worth a listen.