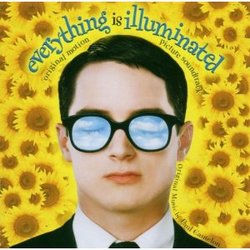 Review: Everything is Illuminated

So, forget everything you know about traditional scoring practices. Just throw them out the window. Imagine yourself instead in a completely new world in the relationship of sight and sound. Pop songs are replaced by Ethnopop that you've never encountered before, and instead of orchestra or electronics, the underscore is full of individualized folk instruments. If you can picture this world, you have some idea of the listening experience provided by Everything is Illuminated.

I know that I overstate the case, but I have this image of the talented minds behind Everything is Illuminated, an adaptation of Jonathan Safran Foer's 2002 memoir, huddled together trying to come up with new and creative methods of filmmaking. I see them seizing on the notion of using obtrusive songs from Eastern Europe to emphasize both the physical and emotional distance Elijah Wood's character Jonathan travels in seeking out the woman who saved his grandfather from the Nazis. They then take a small step and decide to flavor the instrumental score with the same instrumentation and distance. The resulting soundtrack release is unlike any other this year.

All this is not to say that Everything is Illuminated is a bad score. It actually works quite well independent of the film. But I think the work's main problem rests in that niggling detail. I'm old fashioned enough to want more than a score that simply mirrors the screen locale with authentic instrumentation. I want the score to tell me about the lives of the characters on screen or add cohesion to the images. Everything is Illuminated exists as a talented, well-crafted piece of music that doesn't need the movie it accompanies.

The score, which occupies about half of the album, was written by Paul Cantelon, a new name in film scoring. He has worked on short films before and, as part of the excellent band Wild Colonials, the movie Dead Man's Curve. He has also released an album of solo piano works that clearly show Chopin's influence. Perhaps it was a love of that Polish composer that first lead Cantelon towards Eastern European folk music, but whatever the motivation, he obviously knows and loves that repertoire. For Everything is Illuminated, he has not only compiled an interesting assortment of Eastern European folk music (and I say Eastern European because the traditions are from all over the map), he has also written music that imitates those genres so perfectly that there is almost no noticeable change when the tracks slip from the real thing to Cantelon's compositions.

Consider the hauntingly beautiful "Sunflowers." From its opening of polyphonic women's voices it descends into a polka before ending as it began. It is a track that could come from any collection of Balkan folk music. Then there is the accordion and violin melody of "Odessa Medley" that weaves its way through the score. In fact, there is not a cue on the album that does not contain some sort of ethnic instrument, even when it is a small color as in the longest cue "Trachimbrod." That cue alone is a small wonder of understatement in a score that tries to push itself on you. "Trachimbrod" is nothing more than twelve minutes of sustained quiet tones that almost die away before the next enters, creating a meditative state.

The songs compiled for the rest of the score are lively and enjoyable, especially the two from Gogol Bordello, the gypsy punk band that features the blend of East and West that the movie tries desperately to create. Those tracks are like nothing you've ever heard and it takes a few listens just to hear all the strands of influence. In fact, that statement pretty much sums up Everything is Illuminated—it contains disparate sounds put together in uncommon ways for a startling listening experience.