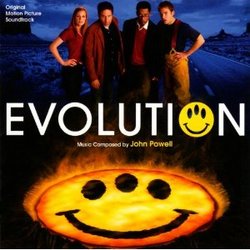 Evolution was supposed to be Ivan Reitman's big "comeback" film.  After the disastrous Six Days Seven Nights and the even more disastrous Father's Day, Reitman really needed a hit.  Evolution is best described as Ghostbusters meets Men in Black.  When a meteor crashes in Arizona, geologist Dr. Harry Block (Orlando Jones) and ex-military scientist-turned biology professor Dr. Ira Kane (David Duchovney) go investigate.  An alien infestation quickly begins to take over the town as alien primordial ooze evolves at an alarmingly fast rate.  With lots of humor intermingled with sci-fi action, the music needed to play both ends of the spectrum.  Enter composer John Powell, who had recently worked on Shrek.

Powell's score to Evolution has a few major themes.  The first is the twangy guitar-heavy theme that, along with playful string work and upbeat percussion, plays off the humor and wackiness prevalent in the first act of the film and is found in such cues as "In The Hall By The Pool", "The Army Arrives", and "Burgled".  When the military shows up and takes over, we encounter a more heroic march, as heard in "The Ira Kane?", and my favorite cue, "The Fire Truck".  There is, of course, the love interest - played by Julianne Moore.  She gets a more contemporary, softer theme heard in "Room For One More".

"The Forest" is a cue filled with lots of harps and chimes and flirting woodwinds that evoke a sense of fantastical wonder.  But it quickly turns into whimsy as the comedy starts playing out.  There are a lot of action cues on this album.  Powell doesn't hold back, and in a few musical cues that remind me a bit of Chicken Run crossed with Men in Black ("The Mall Chase", "The Fire Truck"), he lets it rip.  "The Cave Waltz" is a delightful, well, waltz; "Monitors Out" and "Fire" are tense and creepy cues.

Powell's score was an AFM union recording, and it's noteworthy that as part of a new arrangement, it's a bit cheaper to release more of the score.  One of the stipulations was that all of the members of the orchestra be listed in the liner notes.  Finally we can see who these people are that have been delivering these wonderful performances!  (And we even get more than 30-minutes of score to boot!)  While parts of it sound a bit familiar stylistically to other scores we have heard in the past, Powell's score to Evolution has been playing consistently in my CD player - and that's certainly a testament to its enjoyment!