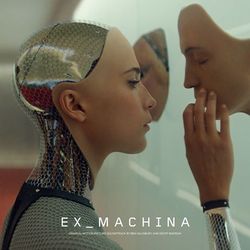 The CD version comes as a double jewel case package—with Disc 1 featuring the main score and Disc 2 featuring bonus material, not available on the digital version.

Geoff Barrow and Ben Salisbury worked tirelessly on this project, not only for the movie itself but for people who wished to listen to the soundtrack as a stand alone experience. The Ex Machina score was mixed at Air Studios and mastered at Optimum with Geoff and Ben present at both sessions. The artwork / imagery has been taken from the actual motion picture and has been pieced together by Invada's very own art director Marc Bessant (Portishead / DROKK).