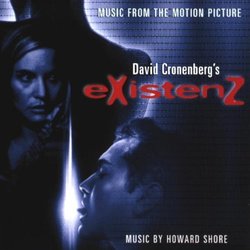 Composer Howard Shore and Director David Cronenberg have had a long-standing relationship. They have worked together on nine films, and their latest one, eXistenZ, explores the human perception of reality. Similar to The Matrix, eXistenZ explores the idea that our reality is not real - it is merely a game. The difference between the two films are that in The Matrix no one knows it's an alternate reality - in eXistenZ, everyone knows it's a game, but at what point are you out of the game? Sound confusing? Well, it's hard to explain - but I would recommend the movie if you are a Cronenberg fan and can handle the graphic violence and weird alternate culture present in most of his movies.

The score to eXistenZ is typical Howard Shore - dark, brooding, and full of dread. From the opening track ("eXistenZ by Antenna"), you can already get a feel for what atmosphere this film is going to have. With his trademark slowly building dissonant muted brass chords, and thematic string section, Shore makes no excuses - this is a creepy score.

Everything about this score has a somewhat muffled or muted tone to it - this is intentional, and should not be interpreted as a mastering issue. This CD runs a little over 46 minutes, and it is very satisfying to listen to - but only if you are a fan of ominous music. This isn't the type of score you would normally play while driving on the highway; this is 10:30pm late night mystery-novel reading music. Something to put you in the mood and keep you ever so slightly on the edge. Once again, Howard Shore has shown us that while being diversified enough to do comedies (Analyze This), he is truly a master when it comes to dark and twisted films.