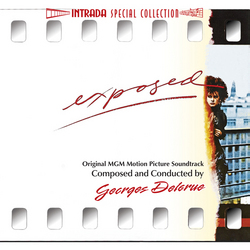 Georges Delerue was known for his beautiful scoring. Gentle melodies, warm harmonies often tinged with sadness... even his dramatic sequences were often subdued and rarely overwrought or florid. His mastery of the strings and a love of the flute were unparalleled, and both are on display with his original score for MGM's 1983 film Exposed. His singular style is evident right from the opening of the score, with a typically lilting theme that hints at the beauty of Paris, but with a pensive undertone, foreshadowing the events to come. This CD includes everything he recorded at two scoring sessions held at MGM on July 27, 1982, including a beautiful excerpt from Bach's Brandenburg Concerto No. 4 min G Major, adapted and conducted by Delerue. The original 1/2" 15 i.p.s. three-channel stereo session masters were preserved in mint condition in the vaults at MGM and have been digitally folded into two-track stereo for this CD.

Exposed stars Nastassja Kinski, a frustrated college student who abandoning an affair with her teacher (director James Toback) and flees to New York. Discovered by a photographer (Ian McShane), she is thrust into the world of high fashion modeling—and high risk experiences—with a sensuous-but-mysterious classical violinist (Rudolf Nureyev) and a charming-but-deadly terrorist (Harvey Keitel). Exposed is an ode to the French New Wave films of the 1960s and Delerue's music completes the homage.

This release is limited to 1000 units.