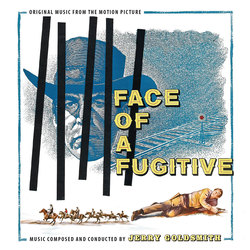 Face of a Fugitive

Intrada announces the premiere release of Jerry Goldsmith's score for Face of a Fugitive, the recording of which was long thought lost. Goldsmith's music for this 1959 Columbia western was one of the earliest in his theatrical career (and first color project!), preceded only by Black Patch and City of Fear. It was, however, his first use of the full resources of a standard symphony orchestra, since prior scores relied on his savvy for using selective ensembles due to limited budgets. Goldsmith was determined to produce a score that would grab the audience's attention right from the first notes. The score opens with an urgent brass fanfare, then takes that fanfare through a series of tortured variations. It's just the start of a tense, percussive score, with moments of warmth, lilting romance throughout and gripping action writing—all hints of where the composer would go with his budding theatrical career.

While the recording sessions had been elusive for years, as luck would have it—a lot of luck—the print takes for the film showed up in crisp mono sound courtesy of the Sony Pictures vaults. Given the age, the sound quality is excellent, with only minor degrees of wear and tear.

The story starts as safecracker Jim Larsen (Fred MacMurray) is escorted to prison by a friendly deputy sheriff. Larsen manages to turn the tables on the deputy in a bid to escape, only to find his brother Danny (Roy Hayes) arriving with his own intentions to free Larsen. In the confusion Danny and the deputy exchange gunfire, the deputy is killed and Danny gravely wounded. The Larsen brothers board a train to the next town, but Danny dies en route, leaving Larsen a fugitive saddled with the murder of the deputy. Larsen passes himself off as a mining inspector in the next town and befriends the local sheriff. The town is involved in a conflict with a ruthless cattle baron who has claimed government land by illegally fencing it. With the town cordoned off and knowing that wanted posters bearing his likeness will soon reveal him as the escaped fugitive, Larsen hides in plain sight, backing the sheriff against the cattle baron and his gang