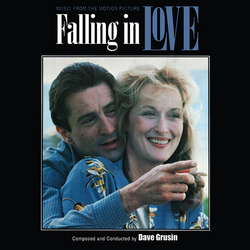 At times funny, at times rueful, at times beautifully romantic, at times sad, and at times painful, Falling in Love hits all the right notes and weaves its spell quite effortlessly. And part of what makes it effortless is the incandescent and beautiful score by Dave Grusin.

No one did this type of romantic film better than Dave Grusin. He simply and effectively captures every mood of the film, with several stunningly gorgeous melodies that weave their way throughout the score, along with some classic upbeat Grusin tunes.

As occasionally happens, several wonderful cues went unused in the film, most notably Grusin's main title theme, which was replaced with an already existing Grusin piece, "Mountain Dance" (tracked into the film several times). For this world premiere release, we're presenting Grusin's entire score, including the original main theme and all of the unused cues, exactly as he wrote it, all transferred from the original session masters housed in the Paramount vault.

It's always wonderful to be able to issue a "new" Dave Grusin score. His brilliant work has graced any number of classic films since he began—his is a distinctive and unique voice in film scoring and Falling in Love is yet another example of his prodigious talents.