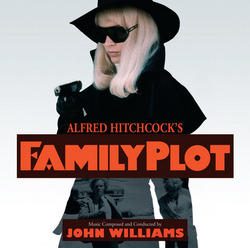 The most important, previously unreleased, John Williams score finally comes to CD, and it only took 34 years! Here it is … John Williams' 1976 score for Alfred Hitchcock's final film – Family Plot.

Only the film's spirited End Title has ever been released previously. At long last, the entire magical, mischievous and macabre score is available. Family Plot is a very important score for Williams in that it established a certain approach and tone of writing that he would further explore in such diverse later scores as Close Encounters of the Third Kind, Home Alone, The Witches of Eastwick and Harry Potter, among others.