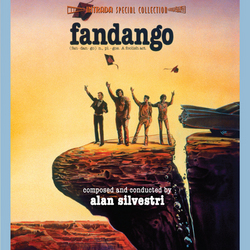 For the 1985 film Fandango, Alan Silvestri fashioned not only one of his earliest large-scale film scores, but also what remains one of his most dynamic. Like his subsequent score to Back to the Future later that year, the score for Fandango is filled with bristling, yet more serious, action music.

Fandango also contains moments of gorgeous transparent tenderness and haunting beauty, making for a diverse score that remains one of Silvestri's finest efforts. The score as heard in the film clocks in at less than 15 minutes, due to much tampering and replacement of the score with pre-existing music. But even the complete score as presented is judiciously spotted, running slightly over 30 minutes. But a powerful journey those 30 minutes are.

For this premiere release, Warner Bros. provided the 2" 24-track scoring session master rolls plus virtually all of the studio and engineering session paperwork, allowing for a brand new mix of the entire score in vivid stereo. Every cue Silvestri recorded is included on this CD.