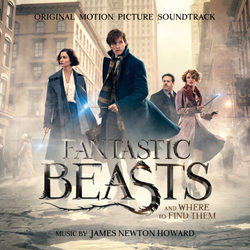 Fantastic Beasts and Where to Find Them

Review: Fantastic Beasts and Where To Find Them

Magical beasts and fantastic melodies leap from the screen in this spin-off of the Harry Potter series. Directed by David Yates and written by J. K. Rowling, this film features a cast of Eddie Redmayne, Katherine Waterston, Dan Fogler, and Colin Farrell. Fantastic Beasts And Where To Find Them follows the endeavors of the quirky Newt Scamander as he travels to New York city. While there, his mischievous creatures get loose, causing havoc around the city. It is left to Newt and his friends to rescue them all and protect the city from an evil Obscurus looming in the darkness.

Composer James Newton Howard presents many of the soundtrack's themes in the "Main Titles" helping chronicle the exposition of the film. He begins the film with a delightful nod to Hedwig's Theme, by John Williams, before transitioning into the "Beast Motif." Entering within the first twenty seconds of the movie, this extended motif uses many fundamental harmonic film score colors. Despite the grandiose start to this motif, it quickly vanishes amongst the myriad of other themes and orchestrations. The "Beast Motif" has a distinct quality in that the time signature of the music alternates between 5/8 and 7/8, providing a bouncy and unsettled feeling. This metric alteration also occurs in much of the dark and foreboding music, making a connection to the wizarding magic which has become evil.

Continuing with the exposition, Howard paints Percival Graves, the villain, cautiously. Heard here and throughout the score, "Grave's Theme" is cliché. With the common use of low, blasting brass, a simple and uninteresting rhythm, and indefinable harmony, "Gave's Theme" leaves the character seeming cheesy and frankly, not villainous.

In contrast, "Newt's Theme" is brilliant, full of hope, resilience, and personality. Transitioning directly from "Grave's Theme," "Newt's Theme" rises from the ashes with its sprightly, rhythmic ostinato. This ostinato does not only invigorate the motion of "Newt's Theme," but it also sings a characteristic melody for both Newt, as a character, and Howard, as a composer. The rhythm leads into a magnificent melodic fanfare. "Newt's Theme" is by far the strongest in the film for its true depiction of Newt as a light-hearted owner of mischievous pets. This theme also represents Howard's compositional style best through familiar progressions and melodic tropes, helping match the character of the music with Newt perfectly.

The greatness of this score lies in its diversity and creativity of stylistic and textural approaches. One of the best cues which balance these aspects superbly is "Inside the Case." This cue takes the listener on an aural journey, as Newt meanders through his magical briefcase alongside Kowalski. The use of color and distinct textures heightens every individual moment throughout this scene. When visiting each of the different exhibits in Newt's briefcase, the music mimics the size, peculiarity, and character of each of his creatures. From the grand fanfare of Frank the Thunderbird, to the cute Mooncalfs that Kowalski feeds, the quaint melodies weave a beautiful and cohesive piece for a very fun and unique film scene.

One of James Newton Howard's best compositional characteristics is his ability to invigorate the audience through music. Through his cleaver manipulation of themes and textures, Howard flawlessly navigates the story through his music. The "Wizard Theme" bares a great deal of resemblance to the themes by John Williams in the Harry Potter films. The theme's versatility and malleability allows Howard to twist the melody into many of the films situations. The "Wizard Theme" traverses through many identities, stalking the audience in "There Are Witches Among Us/The Bank/The Niffler" or spellbinding them in "Pie or Strudel/Escaping Queenie and Tina's Place."

There are also two minor themes which also warrant discussion. "Kawalski's Theme" swings with 1930's jazz influence. The character of the theme works well, depicting the no-mage (non-magic human) with the standard musical style of that time. It contrasts with the rest of the score through its jazz/swing groove and the glissing solo clarinet. This color, albeit unique in the score, is not unusual of Howard. The melodic line of the clarinet, as well as the overall pacing, groove, and accompaniment mimics "Jacks Theme" in King Kong (2005). The problem lies in the similarity of musical gesture in relation to the scenes setting. Fantastic Beasts and King Kong both have locations set in New York City during the same approximate era, making the clarinet solo/jazz color stand out even more as a replicate of "Jack's Theme" from King Kong.

Along with "Newt's Theme," the "Adventure Theme" displays another classic Howard sound, full of strength. Clearly heard in the "The Demiguise and the Occamy" and the "End Titles," this theme is lost to the slew of other themes. Since there are so many themes in this film score, many of the themes only get played a few number of times, leaving them less important and more difficult to remember. While it is unfortunate that the theme gets lost, the "Adventure Theme" is still great and holds true to the Howard sound.

A major criticism lies within a quite prominent theme. In the tracks "A Close Friend," "Relieve Him of His Wand/Newt Releases the Thunderbird/Jacob's Farewell," and "Newt Says Goodbye to Tina/Jacobs Bakery," the theme utilizes a very popular progression alternating between a major one and minor three chord (I – iii). This melody serves as the film's "Love Theme." Discovering more about Newt's past, the viewer learns that Newt had a very close and personal friendship with Leta Lestrange, who was also outcasted while at Hogwarts for a love of magical creatures. Hopefully with future films of this franchise, more about the friendship between Newt and Leta will be unveiled.

The "Love Theme" works perfectly in the two intimate scenes that it is used, but it also swells and drips with emotion during the obliviation scene. Although the "Love Theme" may work perfectly for this film, it is unfortunately too similar to other film themes which alternate between I – iii. One of the most obvious is the theme from The Polar Express (2001). Since The Polar Express is still very popular around the holiday season, the magical Silvestri theme is too ingrained in an audience's ears. It is surprising to hear a theme like this come from Howard since he has such a grand and distinct musical palate himself. Even though the "Love Theme" bares resemblance to many other Hollywood hits, the melody still soars. There is a wonderful lust yet sadness, which is derived from the I – iii progression, making intimate moments in this film powerful and heartfelt.

The vast number of themes and musical timbres used throughout the score is magnificent, but possibly too much to grasp. Despite the number of themes, Howard manages to keep the score sounding consistent. Although the use of certain film scoring tropes lowered the originality of the score, James Newton Howard Howard convincingly scores the characters' emotions, providing a spark of life. In the end, Howard casts a spell, enchanting all with his powerful score.