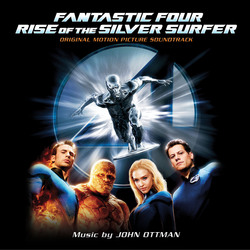 I don\'t think criticizing Ottman\'s talent for melody writing is even feasible at this point. From his compelling Germanic themes in Apt Pupil to his emotional redemptive melody for the personal side of Superman, from his seductive theme for Sebastian in the rejected score to Cruel Intentions to his fun and adventurous Fantastic Four Fanfare, Ottman rarely fails to deliver the goods on that front. It should come as no surprise, then, that the sequel to Fantastic Four, Rise of the Silver Surfer, boasts an amazing theme. What is surprising, though, is the reach of the score. While the trailer to the movie paints a picture of epic battles and über-villainy, the music shows the story for what it really is: a relatively small-scale conflict, more personal than exterior, with plenty of double crosses, stratagems, and introspective moments. One can\'t fault the composer: with Superman Returns, Ottman has proven he can write grandiose moments for orchestra and choir, and he does here a few times, when the storyline allows. Apart from these moments, the score is content to play second fiddle, so to speak, to quirky scenes of power exchanges and foreboding passages of malevolent peace offers.

The album opens with the indisputable highlight of the score: a four-minute-and-a-half exploration of the Silver Surfer Theme. Warped and whispery synthesized sounds establish the otherworldly origin of the silver entity, while the theme itself, a constant unresolved pull between the V and VI chords, is an at times noble, at times menacing minor mode melody, often played by the strings and trombones. As the piece progresses, so does the theme\'s ominousness, with the fading out of the theme proper in favor of towering hits by the orchestra and choir (and sometimes electric guitars) on the alternating chords. This triple-meter theme is a giant ticking clock, heralding the coming of the Devourer of Worlds, a distant cousin to Gustav Holst\'s "Saturn, the Bringer of Old Age". A brilliant overture for the album and quite simply the best musical representation of the Silver Surfer.

The Surfer\'s musical material colors the entire score, its ominous and etheric synthesizers appearing in such cues as "Galactus Destroys", "A Little Persuasion", and "Someone I Once Knew", among many others. His principal theme is heard under various guises: threatening ("Someone I Once Knew"), elegiac ("Norrin Radd", to use the correct spelling), and noble ("Silver Savior"). Its B Theme, more delicate and feminine, gets a stirring rendition in "Silver Savior" before the full brass returns to a powerful and driving rendition of the A Theme. It is no understatement to say the score belongs to the Surfer\'s Theme. The Fantastic Four Fanfare is present, occasionally flourishing such as in the rallying "Springing the Surfer", but more often in broken fragments or hinted at, slipped into a bass line or as part of a joyous tremolo string figure. Dr. Doom\'s celebratory theme is quickly stated in "Pursuing Doom" but is only truly resurrected in "Doom\'s Double Cross", where the low brass, string ensemble, and full choir revel in its glorious dementia. Victor\'s "up to no good theme" returns from the first movie in "Outside Help": it is a discreet assembly of pulsing synthesizer, ratchety güiro, strings, and clarinets.

Ottman\'s approach to scoring the action sequences is closer in my opinion to the focus he gave to the exciting passages of Superman Returns than to the complex word painting he utilized in Fantastic Four, with the notable exception of "Botched Heroics", which reprises a lot of material from the original score, albeit with slightly different orchestrations and minor modifications. I found a cue like "Chasing the Surfer" much more engaging and focalized than most of Fantastic Four\'s action music: there is a constant and modern beat, perhaps courtesy of Johnny Storm\'s rebellious attitude, that drives the music and prevents it from scattering all over the place. The choir is used in a much simpler manner than in the first film\'s score, which brings an energy to the piece without tiring the listener out. "Four in One" uses more tribal percussion instead of modern beats and "Springing the Surfer" is quite simply a great, rousing cue, a grin-inducing return to the fun and adventure of the first score after quite a few minutes of ominousness.

Where the album perhaps falters a bit is in the prevalence of quieter moments, tracks such as "Camp Testosterone/Meeting the Surfer", "Outside Help", and "Mr. Sherman/Under the Radar". Their presence was most surprising to me, who was expecting a score on a continually epic scale. That, however, is the inaccuracy of the marketing campaign, not the composer. Their increased presence, especially in the middle portion of the album, tends to slow it down and dilute the drive and energy of the great action sequences. While Fantastic Four was too frenzied for my tastes, Rise of the Silver Surfer can be a little too somber and hushed in its album presentation. Superman Returns had a great balance, while the Fantastic Four score albums seem to be pushing the extremes.

Rise of the Silver Surfer does an outstanding job presenting its thematic material for the Surfer and, for that alone, it earns a shiny medal. While the quieter passages tend to slow things down and make minds drift, the action material is, in my opinion, stronger, tighter, and more engaging than in the first movie. This score is not in the same league as Ottman\'s Superman Returns: this is, after all, a Fantastic Four movie. There are only so many flowers a gardener can grow in a sandy soil.