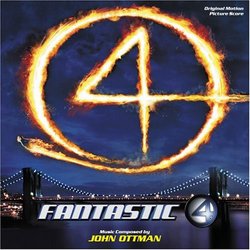 I really wanted to love this score. To be able to cherish it, and get into it, and revel in its marvelous rhythms and quickly descending phrases. Not that I'm a fan of the original comic book; I could never quite get into this particular group of superheroes, preferring the very human and fallible Spider-Man and the mythic, god-like being Superman. But this was John Ottman returning to the land of the superbeings and bombarding us with trumpet flourishes and snare rolls. It had to be a wild ride.

When I first heard the signature theme, I thought, "He totally nailed it, this is what the Fantastic Four should sound like". And, indeed, one would be crazy to fault Ottman on his themes (here and in his previous scores): he has a Goldsmithian gift for assembling clusters of notes around an idea or a character and shaping a musical identity with colors and tones. His theme for the FF draws its energy from Johnny "The Human Torch" Storm's over-the-top bravura. He develops it for an aborted main title sequence in "Main Titles", an unabashedly fun brass fanfare carried over a wild and driving percussion coaster ride. It emerges under various guises in "Superheroes" and is given the finale send-off at the end of "Fantastic Proposal". Ottman sometimes varies its melodic progression, to mixed results. The theme is at its best when played straight, fully blasting, with choral accompaniment.

About that choir.... Ottman has recently crafted his own little niche with the way he uses his choir. It's not Elfmanesque in any way; rather, he injects a lot of dynamism in the vocal phrases, creating short bursts of melodically interesting human voices. The choir is never static; rather, it screams, ascends, beats the meter, whispers, and sometimes literally takes off. The end of "Experiments" is a showcase of that choral style, with the singers "ah-ah"ing the main theme over an accelerating musical chaos.

The other themes are never strong enough to stand in the same league as the Fantastic Four fanfare. Ben Grimm, AKA The Thing, gets a delicate, Americana trumpet and strings piece which makes us long for Ottman's potential treatment of the Smallville material in the upcoming Superman Returns but which loses some of its power in the company of the more robust and heroic thematic flares; and Doctor Doom, who here gains his powers alongside the Fantastic Four, is represented by the FF theme, mutated to a minor mode and backed by dark, chanting choral outbursts. As for the action music, it is a breeding ground for word painting, a technique whereby the music is made to emulate the action, a sort of grand scale mickey-mousing, if you will. It's fun for a while, but falls short of interest and reveals that Ottman fares much better with dark, dramatic material than lightweight, bubble-gum adventures.

I wasn't a huge fan of his score to X2: X-Men United, which I felt meandered and lacked cohesion. However, when compared to the kinetic and jumpy Fantastic Four, X2 gains maturity and dedication. Like I said, Ottman might have enjoyed letting his hair down on this one, but his true creative talents lie in illustrating the pain of the tormented human being, imperfect and alone, and in crafting truly addictive themes. He takes the FF off the ground here with mixed results: the theme is perfect, but the caricaturesque, almost cartoony action music at the halfway point is exhausting. An infatuate of Williams and Goldsmith at their best, Ottman is next set to tackle Superman Returns and, even if his superheroic music falters a bit here, recalling the awkwardness of the "March of the Villains", it makes me hopeful that he can still give the tights and cape a brilliant, gleaming gem of a score.