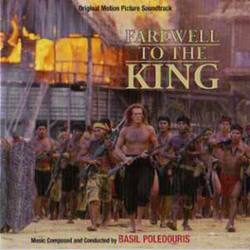 Farewell to the King

Review: Farewell to the King (expanded)

Basil Poledouris\'s grand score for the 1989 film Farewell to the King means many things to me, but one identification which might sound odd is with my high school graduation. On the day of the graduation ceremony, a sunny Friday in June 1991, I purchased the CD as a gift to myself, having never seen the film or read a word about the music. We all have composers like this in our collections, who engender a knee-jerk response to own all that they create. I immediately copied the tracks to a cassette (again, this was 1991) to be able to listen to in my car on route to graduation and the all-night celebrations that followed. Tracks such as the resounding "Farewell To My King" will always rekindle memories of that drive home the next morning, as the sun was rising on a new day and I knew I had said good-bye to that chapter in my life, the music heralded an ending but also the great possibilities of achievement in what was to follow. It is marvelous that the score has not only been re-released but also expanded, able to be discovered by new film music fans and imprint itself on their experiences.

In this new version, the cues are arranged more in film order than on the original Varese Sarabande issue, with bonus and alternate tracks consigned to the end. And while the film itself is set during World War II and concerns an American soldier who is adopted by a tribe in Borneo and eventually retaliates in vengeance against the Japanese, I have found that it makes a wonderful companion piece to Poledouris\'s own Conan the Barbarian. Both films were collaborations with director John Milius, whose affinity for heroic, mythic storytelling has inspired some of the richest and most profound music from Poledouris. An abundance of heart and courage is present in both scores, but they could be said to represent these qualities at two stages in a warrior\'s life. In Conan the Barbarian, the power and force of the music is meant to represent the new warrior when his strength is manifest to all, when it is apparent that he is the kind of man to triumph in all contests and effortlessly claim victory. Farewell to the King essays this warrior at the other end of life, having fought and survived a thousand battles, now reflective and resigned to fewer days ahead than behind, yet still able to muster his eternal strength when called upon. I have imagined this score as one which could accompany the story of an elder Conan as a weary king, burdened for too long by his crown and gracious for the rare opportunity to draw his sword and win one more conflict.

The exotic locale of Borneo is displayed in "Prologue – The Trek" through gongs, chimes, percussion and low flutes, with the main theme briefly previewed at its close by the shakuhatchi. It is then fully developed in the "Main Title" by strings for the rising, victorious opening and climactic portions and by shakuhatchi for the warm, sympathetic bridge. Its most potent presentation can be heard in "Nigel\'s Trip". This theme dominates the score as its sturdy backbone, around which gather a plethora of subordinate yet memorable thematic material, much like loyal troops rallying to support their beloved king. "The Battle Montage" might be the strongest example of this, as it echoes the aggressive spirit of Conan the Barbarian, but from a more graceful, eloquent standpoint. Meanwhile, the gentle soul of the elder warrior emerges in such sublime cues as "The War Is Over" and "This Day Forth".

Further variety is provided in "Zed Force", a march steeped in British pomp and circumstance, and in the charming, elegant "Imperialist Waltz", while more examples of gripping action can be found in "Night of the Living" and "The Village Attack". However, the primary focus of the score is of reflection and remembrance, a tone poem filled with memory, both melancholy and joyous. As the "The Battle Montage" material is revisited in the final cue, "Farewell To My King", there is the sense that the old warrior has not yet reached his end, that his strength may still grant him victory in this world and into the next.

I feel that Basil Poledouris produced his best and most enduring work for the films of John Milius and Paul Verhoeven. This is not to ignore the fine music he has composed for Simon Wincer and Randall Kleiser, but because the music for the former transcends the genres for which they were written, bringing profundity and insight to what could have been simple tales of surfers, barbarians and robotic policeman. If you are fan of the composer and do not yet own this title, it deserves to be in your collection.