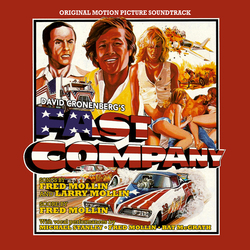 Dragon's Domain Records is excited to announce the premiere soundtrack release of Fast Company, featuring music and songs produced by Fred Mollin, mastered from the composer's own elements by James Nelson at Digital Outland. The booklet contains liner notes written by author Randall Larson featuring the participation of the composer.

Fred Mollin was hired by producer Michael Lebowitz, a longtime friend, to provide music and songs for Fast Company. Mollin wrote the songs and composed the score; Mollin's brother Larry provided lyrics for three of the songs, including the title number. Mollin had been successful at the time as a record producer and also as a single/songwriter. Lebowitz was looking for music for the film that would be evocative of Bruce Springsteen. In the studio, Mollin assembled a great band to play with. Steve Lukather, who went on to fame as lead guitarist for Toto, and is considered to be one of the world's greatest electric guitar players. Mike Porcaro, who was also a part of Toto after the first bass player left. Ed Green on the drums, Mollin on guitar. And John Jarvis played all the keyboards, Finally, Dan Ferguson, son of composer Alynn Ferguson, played electric rhythm guitar, a popular studio musician at the time. He played the guitar for the Barney Miller theme. Michael Stanley of the Michael Stanley Band performed vocals on two songs for the film, 'Fast Company' and 'Let Us Run Wild'. The music was mixed and recorded at Westlake Audio by Mick Guzauski, one of the great mixers of rock music. Fast Company was Mollin's first scoring assignment.