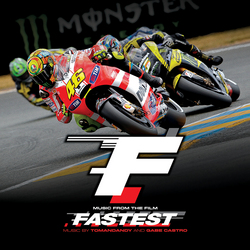 Fastest (the sequel to the smash hit Faster) is the new documentary feature film by Mark Neale (the director of Faster, The Doctor, The Tornado and the Kentucky Kid and producer of the X Games).

Fastest captures a pivotal moment in the sport. Chasing his tenth world title, the legendary Valentino Rossi runs into the thoughest challenge of his life: a wave of ferociously fast young riders, a horrific, leg-shattering crash at the Italian Grand Prix, an agonizing comeback forty-one days later in Germany, and the question every rider—even the greatest of all time—must face. Who's fastest now? In 2010, Jorge Lorenzo stole the MotoGP crown. But is Rossi still the king? The high energy, electronica pumping score is composed by duo Tomandandy (the composers behind the acclaimed score to Resident Evil: Afterlife).