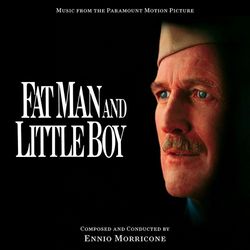 La-La Land Records presents the world premiere release of acclaimed composer Ennio Morricone's (The Man With No Name Trilogy [A Fistful of Dollars, For a Few Dollars More, The Good, the Bad and the Ugly], The Thing, Once Upon a Time in America, The Mission, The Untouchables) original score to Paramount Pictures' 1989 docudrama Fat Man and Little Boy, starring Paul Newman, Dwight Schultz and John Cusack, and directed by Roland Joffe.

Never before released in any format, Ennio Morricone's hauntingly beautiful and complex orchestral score receives a definitive, 2-CD treatment that demonstrates the composer's notable skill in emotionally interpreting what is at once an amazing and tragic chapter in mankind's history - the birth of the atom bomb. Full of dramatic suspense, passion, sadness and gravitas, this is a notable, major Hollywood work by Morricone that is ripe for discovery - especially since some of it has never before been heard, as several cues and portions of others were dropped from the final cut of the film.