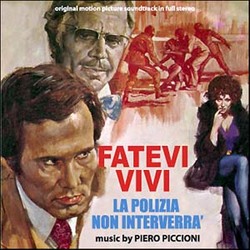 Digitmovies proudly presents as volume ten of the series dedicated to the Italian police movies genre the complete OST in full stereo by Piero Piccioni from the movie Fatevi vivi,la polizia non interverra

At the time of the film's release only a 45 rpm single was issued on the United Artists label (UA 25757) with the two tracks "Kidnap" and "Agguato" (here Tr.1 and Tr.2) in stereo. Although we did get the license to release this OST, unfortunately the original session master tapes have been lost for a long time. After various searches we were able to find in the composer's private archive the original tapes in full stereo and in very good condition which gave us the chance to issue this CD with a duration of about 60 minutes.

The OST is a fabulous mix of lounge and action music, quite different to the usual and well-known sounds of the Italian genre, but closer to the music of some British TV series such as The Persuaders.

Dynamite-like action music gets alternated with sensual lounge atmospheres and the whole criminal side of the plot is described with mysterious, suspenseful and obsessive themes where the author uses the sound of the Jew's harp and the tubular bells. An OST rightly and properly rescued and preserved as tribute to the Italian Silver Age and to the wonderful music art of Piero Piccioni.