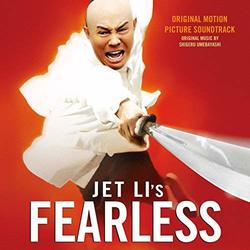 Ever since the surprising success of Crouching Tiger, Hidden Dragon, intelligent, epic martial arts movies have regularly appeared in our theaters. They have been a breath of fresh air to those of us tired of the overblown Hollywood action films that tend to hit us over the head with noise and fury instead of beguiling us with story, action, and character combined.

The success of these epic martial arts movies has had two effects: First, the average American has come to know and appreciate the artistry of Jet Li. The former wushu champion has long been a film star in Asia, but only in the last five years have American audiences embraced him, particularly after his work in Zhang Yimou\'s Hero. Second, the sound Tan Dun created for the score to Crouching Tiger, Hidden Dragon and later perfected for Hero, has become the sound of American-released martial arts epics. These two trends come together in the new film Fearless.

Fearless, the story of wushu legend Huo Yuanjia, is the equivalent of any American underdog sports story, only with wushu as the metaphor for life instead of boxing or golf or football. It has the distinction of being Jet Li\'s announced last martial arts picture. If so, it is a fine final chapter to this part of his career as the movie has an obvious subtext of violence being counterproductive to living a full life. Musically, as you might expect, Fearless falls squarely into what I can only call the "Chinawood" sound. It is a mixture of Western harmonic forms and instruments (usually strings) with Chinese instruments. Just think back to Crouching Tiger, Hidden Dragon – an orchestra playing most of the sweeping themes was counterbalanced by small ensembles of Western instruments, such as Yo-Yo Ma playing the cello, and Chinese ones, such as the erhu and dizi. What was most remarkable about that particular score was the use of drumming patterns from Peking Opera to choreograph the fight sequences. No one had ever done that before and it was incredibly effective.

Fearless was scored by Shigeru Umebayashi, no stranger to martial arts epics as he scored Zhang Yimou\'s follow-up to Hero, House of Flying Daggers. For that film, Umebayashi chose to focus on silence as much as sound, and result was different enough from the expected to make your ear perk up. Unfortunately for Fearless, Umebayashi chose to jump on the band wagon and contribute another score in the "Chinawood" style.

This is not to say that Fearless is a bad score; it just isn\'t a great one. The melodies are lovely. The main theme, presented by bamboo flute right at the beginning in "Opening Title - Wu Shu Jing Shen," is lyrical and understated for half the cue. Then the cymbal rolls in and a string orchestra begins bolstering the melody and it becomes a bit too bombastic. This tendency to overstate by underscoring Asian instruments with Western ones occurs throughout the score. "Mrs. Huo/Action" begins with a simple melody on the qin, but it quickly moves again to the strings, with layers added on top of layers until the fight breaks out, a fight scored by Peking opera percussion patterns. There are even cues like "Yuanjia and Moon" which sound as though they were written for any number of Hollywood epics.

Even so, there are cues of surprising tenderness and life, mostly the numerous short cues that pepper this score. The three "Kids" cues use instruments not usually heard in these movies like wooden zylophones and a variety of percussion instruments. These cues are lively and fun and over much too quickly. There is even a gorgeous end-blown flute solo in "Hasu - Tea Ceremony." But these cues do little to counterbalance the rest of the album.

Fearless represents a collection of lovely miniature cues and larger, overdone ones. If you enjoy the sound of Crouching Tiger or any number of other martial arts epics, you will find much to love about this score. But if you are looking for something new and striking to finish out Jet Li\'s striking career, I\'m afraid you\'ll have to look elsewhere.