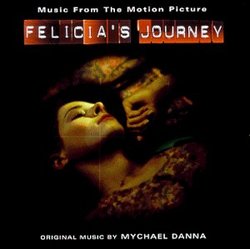 One of the most groundbreaking musical ideas in western history, the serialist system of composition has, for better or for worse, fallen back from the forefront of "serious" music. Perhaps Schoenberg's invention is taken by most music-listeners (and quite a few actual musicians) with the old adage, "if you can't say something nice, don't say anything at all." With the birth of minimalism and our present post-modern rage, it seems most composers have turned their back on straight-ahead 12-tone writing—including Mychael Danna.

But then he gives us Felicia's Journey, again managing to leave his unmistakable mark on a score that is almost completely unlike anything else he's written. The string-heavy music for the opening titles is clearly modeled after the quasi-romantic "kitsch" of '50s commercial music—stylistically, it's akin to parts of Kamen's Brazil, of all things. After this, we get the first of a few cues featuring the Gaelic new-age music that Danna's been doing for years. After all this time, he's become more than proficient at it, and it is the aforementioned moments of levity (and almost sentimentality) that might catch the listener somewhat off guard.

Then comes "Lost In the City," a cue that, in its brevity, introduces the twelve-tone row that will be the basis for all following serial pieces on the album. The chamber ensemble that plays these cues is—as Atom Egoyan mentions in his brief liner note—akin to Bartok. Still, Danna never lets his minimalist leanings slip too far, and with the last thirty seconds of "Pain Will Wash Away" comes a tonal variation on the 12-tone set which has an ambient, otherworldly beauty on a plateau with the likes of Gavin Bryars.

The above is mainly descriptive. The bottom line is—is the music good? Were I the one asked, the answer is certainly yes. However, one must take into account personal taste, which is more of a factor with this score than most others you'll find. I sometimes find myself listening to the likes of Schoenberg, Webern, and their disciples in my free time, and I enjoy it. If that type of music is not your cup of tea—and for many people, it isn't—then this would be a score to pass on. Otherwise, it's quite an aural experience ... but isn't that what we've come to expect from Mychael Danna?

Justly enigmatic film scores march on. Blending in Irish textures for a young Irish girl as she searches for her lost love in England, there are strident effects for the presence of an unscrupulous older man she stands by. Mychael Danna explores the entanglements and employs uneasy tones to reveal the bifurcation of the relationship; his music is by turns ingratiating and acrimonious, a hybrid both tragic yet strangely enchanting.

A few cues reserve a deceptively bright outlook, such as "The Cooking Show," the opening of "Message," and two oldies sung by Malcolm Vaughan ("The Heart of a Child" and "My Special Angel," albeit the latter distorted by a baleful recitation from actor Bob Hoskins at disc's end), but the majority are shamelessly inharmonious. Danna's introductory theme is full of sentimental string waves and flourishes, but the delicate theme recurs in "Savage Garden," then molested, stripped of its innocence and melody. This treatment is effective at first, but the composer turns it into a distracting flaw by repeating the idea often; as the music evolves, the juxtapositions are less of a dramatic device and more of a gimmick. Yet the melodious and inharmonic aspects, taken individually, are original, and definitely effective. An extract of director Atom Egoyan's concise commentary from the album booklet explains, "As he explores a spectrum of tonalities and textures, Mychael makes the journey shockingly gentle and reassuringly violent. Nothing is what it seems." This aural game of bait-and-switch, if overextended, is itself a rare filmusic device, aided by a hand skilled with tonality and atonality alike. But perhaps that is an oversimplification. The melodies are sweet, but the shock effects are sweeter. Sounding like the illegitimate son of a symphony and a trash compactor, the cacophonous tracks are so brutal and offensive that they are captivating in their power... They embody the worst kind of evil—not an evil that clearly frightens, but an evil that seduces. Attractive melodies twist into a dark oblivion.

Also heard are eerie settings of appropriate Gaelic texts, carried by the beautiful voice of soprano Kate Crossan, adding to the unsettling atmosphere.

The soundtrack is not pleasant to listen to in the traditional sense. Fans of the untraditional sense may find a favorable experience. Certainly, fans of Danna will not find disappointment.