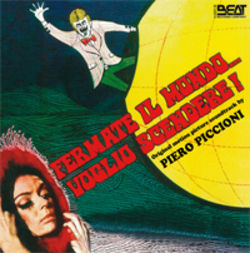 Another unreleased score from the prolific filmography of the great Piero Piccioni finally released on CD! Fermate il mondo... voglio scendere! is a satirical film directed in 1970 by Giancarlo Cobelli. For a story in which the protagonists are lost in the urban jungle of the city, Piccioni composed a brilliant score in which he alternates a classical waltz theme ("La pecorella") with numerous pieces of beat music. For this CD, we had access to the stereo master tapes of the original recording sessions.

Mastering by Claudio Fuiano, graphic layout by Alessio Iannuzzi and liner notes (in Italian and English) by Fabio Babini.