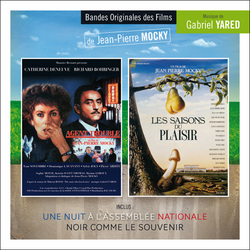 In Agent Trouble, Jean-Pierre Mocky adapted for the big screen a mystery novel by Malcolm Bosse starring Catherine Deneuve and Richard Bohringer. The director called upon Gabriel Yared, whose music for Jean-Jacques Beineix's Betty Blue had come out one year earlier, earning him an accolade as one of the shining lights of French film music composition (after his work for the variété française and his collaborations with directors Godard, Christian de Chalonge and Costa-Gavras).

Yared composed one of his most exciting and very colourful scores paying homage to Bernard Herrmann (North by Northwest, Vertigo and Psycho) with its frenetic chords, a glamorous yet chilling atmosphere, grandiose horror and tender irony.

In Les Saisons du Plaisir, he chose to personify the gallery of characters with an ensemble of choral singers, certain of which hail from the group Double Six (Christiane Legrand, Claudine Meunier, Isabelle Perrin, Michel Barouille and Jean-Claude Briodin), a formation that successfully reprised many jazz standards at the beginning of the 1960s.

In Une nuit ŕ l'Assemblée Nationale, he goes some distance to mistreating a French institution (in this case a military concert band comprised principally of saxophone horns), getting them to produce music close to the farcical marches of Nino Rota.

In 1995, their collaboration ended as it began, with a detective thriller, Noir Comme le Souvenir, this time adapted from a novel by Carlene Thompson (Black for Remembrance). The main theme is based on a lullaby with a Slavic flavour (sung by Karine Costa), as tender as it is dark, prefiguring in its design the lullaby that Yared will write four years later for another thriller, Anthony Minghella's The Talented Mr. Ripley.

Gabriel Yared is one of the best composers who succeeds to express what Mocky is not able to show in his images, due either to an excess of modesty or of anger. Gabriel Yared's compositions demonstrate that behind the ugliness of Mocky's Circus Parade doubtless hide the first stirrings of hope.

Nicolas Magenham wrote the liner notes for this brand new album. He is a member of the pop band Sans Sebastien (www.sanssebastien.tumblr.com) and has composed scores for many short films. He has also written essays on cinema that are included in Le Dictionnaire du Cinéma Populaire Français and Literary Readings of Billy Wilder.