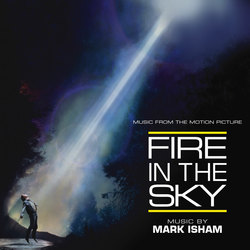 Fire in the Sky - Expanded and Remastered

Composer Mark Isham's compelling score to this involving and reportedly true account of a rural timber worker's alien abduction is a potent and elegant musical work, brimming with tension and atmospheric suspense, but also heart and Americana. It's a rich, dynamic meld of inventive synth and traditional orchestra that is celebrated in this remastered CD presentation, expanded with previously unreleased music. Produced by Dan Goldwasser and mastered by James Nelson, this limited release of 1000 units features exclusive, in-depth liner notes by Jeff Bond and art direction by Goldwasser.