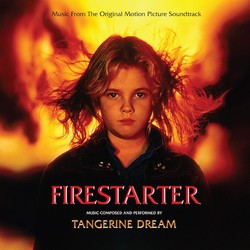 Firestarter, based on a 1980 book by Stephen King and directed by Mark L. Lester, starred eight-year-old Drew Barrymore as Charly, a girl with pyrokinetic powers owing to her parents' participation in a secret study of hallucinogenic drugs. When the agency behind the experiments comes for Charly to weaponize her powers, led by an assassin played by George C. Scott, she goes on the run with her father.

The band considered Firestarter one of their most challenging scores, as they needed to provide not only suspense and pace for the paranormal chases and powers, but an emotional sensitivity to the child protagonist. New liner notes by Randall D. Larson explain how the band did not score to picture, but created "wild" cues to be used by the film's music editors. Hence this 11 track program is the same as MCA Records' 1984 soundtrack album, released by Varčse Sarabande on CD in 1990, and newly remastered for this long-awaited reissue.