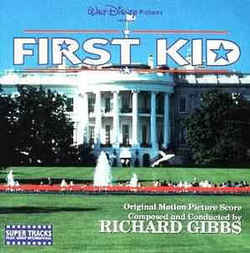 by James Barry June 13, 2004
2.5 / 5 Stars
I was one of those few who saw First Kid, and it's certainly on a plane higher than some of the Disney embarrassments that I won't mention. I also remember that in the context of the film, Gibbs' score was quite apt, adding comic levity and the pomp and circumstance that comes with such presidential subject matter. On the CD, it's a generally mixed bag.

Most of what we get on this disc is cartoon-ish action/incidental music. Again, it's quite good with the picture, but like so many scores these days, it does very little for me as a listening experience. The exceptions to this are the moments of thematic fun—namely, the Main Title, "Caravan's Here!", and "The First Kid". The first and last of these feature nice renditions of the film's playful theme, and all three include statements of the rather bold brass and snare theme that tells us that something presidential is going down. The merits of the album are found mainly in these three cues. Not a great score, but the aforementioned eight minutes or so give me a bit of hope for Gibbs' future endeavors.