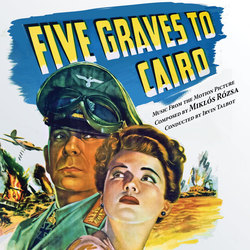 Five Graves to Cairo / So Proudly We Hail!

The final installment in Intrada's series focusing on the Paramount scores of Miklós Rózsa features five scores from an incredibly busy period for Rozsa—all five scores represented in this collection were written (or at least recorded) during 1943.

In Five Graves to Cairo, Rózsa's score is one of his strongest from this period—dark, gritty and laden with somber dissonance. Throughout the film he demonstrates his peerless ability to sustain tension through subtle musical means: unresolved harmonies; nervous, rhythmic ostinatos; repetitive melodic figures that seek resolution without finding it; rhythmic and melodic distortion of familiar motives.

In So Proudly We Hail!, the "Prelude" opens with the eponymous phrase from "The Star Spangled Banner," which Rózsa subjects to vigorous contrapuntal development before seguing to the film's love theme, and finally into a martial passage accompanying the opening text scroll, setting the tone and direction for the rest of the score.

For The Hour Before the Dawn, the "Prelude" mines a more open, expansive vein than the terse phrases of Five Graves to Cairo' main title.

In The Man in Half Moon Street, very little of Rózsa's score has survived, but one brief cue ("The Diary") that was not part of Intrada's 2014 re-recording of highlights (MAF 7132) survives. From the portentous opening—which segues to a typically ardent love theme—to the turbulent "Finale," the score bears all the hallmarks of Rózsa's emerging '40s style.

In his entire career, Rózsa scored only two films that might be called "westerns." The earliest was The Woman of the Town, a 1943 picture about a saloon singer (Claire Trevor) whose essential goodness and ultimate self-sacrifice lead the legendary Bat Masterson (Albert Dekker) to give up his guns. The only cue from Rózsa's Oscar-nominated score to survive, the "Finale," opens with a string setting of a traditional hymn ("Lead, Kindly Light"), briefly references the film's love theme and then gradually segues to the principal theme—a melody which significantly avoids the kind of mordant chromaticism that characterized his noir scores.

With this compilation, Intrada "closes the book" on all surviving, Rózsa scores from the Paramount vaults. As with past releases, the audio has been sourced from 35mm magnetic film copies made long ago from the original optical masters—with the exception of two cues from Five Graves to Cairo ("Prelude" and "Walk in Desert"), which derive from the film's composite audio. In the case of Five Graves to Cairo, this album features 10 minutes of music not heard in the film and So Proudly We Hail! features over a minute of previously unused music.