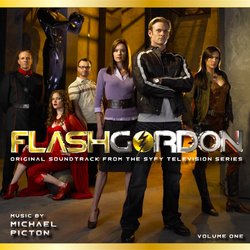 We are proud to announce the release of the soundtrack from the Syfy Network series Flash Gordon which aired in 2007-2008. The show ran for 22 exciting episodes and featured the music of composer Michael Picton.

The music for Flash Gordon features bold orchestral sounds mixed with a rock vibe and even brooding atmospherics. There are moments that rock the listener where others lure them in with a nice melody. While Flash Gordon only ran for one season, there is a lot of great music for fans and collectors of science fiction scores alike.