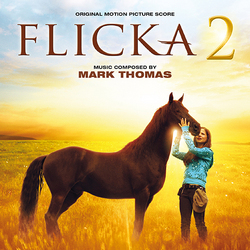 This is Mark Thomas' third score for director Michael Damian, who is an accomplished musician himself and has a strong belief in the role of melody and the power of music in his storytelling.

The Flicka 2 score features many tender moments where the solo guitar takes the lead over soft strings, but also darker orchestral music as well as big, sweeping thematic writing matching the grand vistas of the film's Wyoming setting.