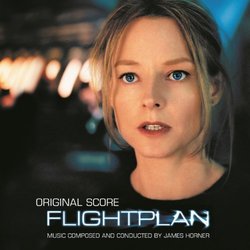 Just as the last quarter of 2003 saw a glut of James Horner scores (Radio, The Missing, Beyond Borders, House of Sand and Fog), this fall there is another sudden onrush of films scored by the award-winning composer. Beyond this tense thriller Flightplan starring Jodie Foster, there is also The Legend of Zorro, The Chumscrubber and The New World, so both fans and critics alike will have a fair amount of music by Horner to discuss, dissect or simply enjoy. Flightplan bears some similarity to Panic Room, another film where Foster plays a mother alone in extreme, dangerous circumstances who must either safeguard or rescue the life of her daughter. Thrillers such as these can be tricky scoring opportunities nowadays, as it is typical to simply highlight and reinforce the danger in an ambient, unobtrusive manner, leaving little room for interesting thematic development. I still find that modern thrillers have scores that work better in the film than apart from it, no matter which talented individual provided the music.

Beginning with "Leaving Berlin", Horner lays the groundwork for this effort in both low end and fragile cascading piano figures, strings, woodwinds and light percussion. Even when not sketching out an obvious 8-bar main theme, Horner still tries to develop his lengthy cues in an appealingly melodic fashion. There is an oboe line to follow in this opening track, but it is not displaying some thematic base for the score to return to, it simply becomes a melodic line for the moment. Small crescendos abound to highlight edits in the scene and motivic material returns in both the cascading harp and piano and ominous mid-range strings, all in a through-composed fashion. A gentle, high-range 5-note theme reoccurs on piano in the last 3 minutes, giving the score its unobtrusive main theme.

"Missing Child" starts with legato, mid-range strings in a troubled tone, sharing some of the same harmonic intervals displayed in the opening track, much of which exists in the big Horner playbook of film scoring. Still enjoyable, but somewhat predictable. There is a reoccurring, arpeggiated motif for the strings and the melancholy 5-note theme is heard on oboe. Strings certainly dominate thus far, but in a more controlled fashion as opposed to past Horner scores where this section of the orchestra alone can swell and overwhelm the listener like a 30-foot wave.

Next up is the almost 10 minute "The Search", in which not only does the Horner favorite, the shakuhachi, make an appearance, but also the score\'s energy level increases through familiar Horner snare drum figures and string ostinatos. Tense string sustains and woodblock percussion briefly intercedes, followed again by the cascading piano, snares and then rising strings. Horner does actually keep the interest level up through the steady pulse and increasing intensity of the track, along with some intriguing, fluttering woodwind clusters. Interestingly enough, Horner used five pianos in the score, many of them prepared and used as percussion.

"So Vulnerable" brings the main theme back in a small grouping of the strings, adding some melodic variations, before the oboe takes over. Ominous percussion and basses bring the track to a close, segueing nicely into "Creating Panic". The tension returns through the cascading figures, low end piano, steady percussion and shakuhachi. The pace increases, there are glissando strings, chattering staccato flutes chatter and a few Aliens-style crashes to carry us into more action before the track closes in a subdued, tuneful fashion with rolling strings and light piano. "Carlson\'s Plan" begins mysteriously in strings and fluttering flutes leading the racing upper strings ostinato, bolstered by chaotic piano crashes and clattering percussion. The intensity fades down briefly to a sparse grouping of woodblock, odd pizzicato string and orchestral rumblings before the main theme unfolds from this tension in a lush yet fevered, driven guise. Some brighter tonalties dance about in the closing minutes before the pounding percussion and insistent col legno strings dominate again.

The final track, "Mother and Child", pounds forth at its start but the 5-note main theme emerges in the strings, moving from a worried tone into a brief but glowing major key version to resolve the tension. Piano and harp then take center stage in a pensive manner, followed by low strings and oboe in a melancholy fashion, the violins rising from it all in their own sad yet lovely counterpoint. The main theme is sketched out once more for a subdued closing. Overall, I enjoyed this Horner score more than I thought I would, finding it more engaging and consistently listenable than others he has composed for the thriller genre. I also think I enjoyed the unassuming nature of his main theme, where it is not even trying to approach Titanic-type levels of long lined melody, ready for a transition over to Top 40 radio stations. And with no brass utilized, that infamous 4-note danger motif of multiple past Horner offerings is nowhere to be heard!