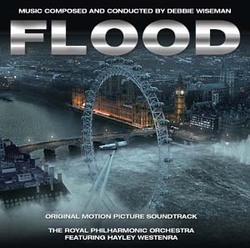 I have to give credit where credit is due: Debbie Wiseman is a great composer. The material she musters for Flood is strong and sometimes poignant; but the trend I detected in Middletown seems to have snowballed past the point of enjoyment here. Listening to Flood is a constant mental battle between understanding the need for an unrelenting assault to represent the flood and yearning for more diversity. To represent the unstoppable flood that overtakes London, Wiseman astutely calls upon a battery of rhythmic and melodic motifs that sound inexorable and relentless in their continual assault; yet, this constant reiteration of the same material, rarely varied upon, makes for a wearisome listen on album. This is a fine example of a score perfectly suited for its source material but which loses much of its power when taken on its own.

The most effective theme on album is the sorrowful requiem beautifully sung by Hayley Westenra which opens the soundtrack and to which Wiseman returns every now and then, a delicate yet powerful elegy for the human element of the drama. In between statements, however, a whooshing synthesizer ushers in the pounding barrage of strings, brass, and electronics which the composer has chosen to represent the tidal wave and its impending doom. The low brass steadily beats a marching rhythm while the violins make urgent, descending runs. Modern electronics beat and flicker around the simple timpani hits, and this combination is uttered again, and again, and again...  and again.

A note on Wiseman\'s use of electronics in this score is warranted, especially given that that the composer is primarily known for the organic quality of her orchestral works. This may be the first major project on which she has make such blatant use of electronic effects; it was certainly my first exposure to them and I found them to be shoddy and distracting. My general aversion to electronic music may affect my judgment here, so this note is to be taken with a grain of salt. But given that Wiseman has made such a lasting impression expertly orchestrating her music in the past and stunning her listeners with the purity and power of her orchestral writing, I was disappointed in her reliance on modern effects that did little to enhance the urgency of her music. Different projects require different approaches, but listening to a cue like "Theft of the Crucifix" from the composer\'s own Arsène Lupin, I was reminded of how brawny and unabating her orchestral music can be when she solely depends on the brass, strings, woodwinds, and acoustic percussion.

That is not to say that Flood is bad; on the contrary, Wiseman makes the pulse pound and the heart bleed with her combination of intense marches and touching laments. While the electronics sound second-rate to me and were more distracting than effective, it\'s the unending repetition of material that makes Flood a tedious album. Sometimes, music that is perfect in context suffers on its own. I am still amazed at the music that seems to come so naturally out of Debbie Wiseman\'s pen: here\'s to a future project more suited for an album release. For now, though, I\'ll go back and give Arsène Lupin another spin.