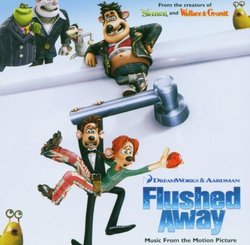 In Flushed Away, another popular CG-animated film starring talking animals this year, a mostly British voice cast helps tell the tale of a pampered, upper crust rat who ends up flushed into the London sewer system and discovers a world very different to his own. The only common criticism leveled at the film was that its pace was too frenetic and a few pauses would have helped the imaginative world breathe a little. Composer Harry Gregson-Williams is no stranger to the colorful palette of such animated fare, although here he had to be squeezed in among an eclectic collection of pop and rock standards, both old and new. They seem selected mainly to appeal to the adults in the audience, keeping their ear\'s attention through recognition, as it is doubtful that kids under a certain age would know anything about The Dandy Warhols or Tom Jones. Using such tunes as Tina Turner\'s "Proud Mary" or "What\'s New Pussycat?" by Tom Jones would serve mainly as aural gags and jokes in the film and probably could have been omitted from the album. Sprinkled about the established classics are brief ditties written for the movie and performed by its characters, The Slugs. They even provide vocal support on Bobby McFerrin\'s mellow "Don\'t Worry Be Happy". "Ice Cold Rita", also featuring Hugh Jackman, who voices the primary rat, is the most fun of the tiny tunes, but none really have a chance to develop beyond a few dozen seconds and thus punctuate moments in the film far better than making for a good listening on disc. And lastly, in true British fashion, is the inclusion of "Yakety Sax" by Boots Randolph, the name of which might not be familiar to most, but it became famous for being used repeatedly in the wacky, baudy British comedy The Benny Hill Show and subsequently in current favorites such as The Simpsons.

Gregson-Williams\'s work is represented in two tracks, the first sharing its minute running time with the aforementioned vocalists The Slugs and the second receiving a more expansive treatment at almost five minutes. "Marcel / That\'s Not Rice You\'re Eating" opens with a jaunty accordion line in true French fashion, then moves on to provide waltz-like support for The Slugs. "Life in the Sewer" begins in a pleasant, subdued manner, with short, sweetly earnest melody passed from clarinet to flute and chimes, onto horn and oboe. Acoustic guitar comes into to play gently, accompanied by clarinet, as the same melody is developed further, before more active orchestral elements appear. Strings dance and flow like a river while the brass rise triumphantly, leading into a bright, percolating busy section. The tone dips briefly into something sneakier yet still active then finishes subtly with what could almost be a swaying pirate ditty, on flute and accordion. This suite is the standout track on the album, unless someone is specifically looking for a recording of the 80\'s Billy Idol classic "Dancing With Myself". Film score fans will certainly enjoy the Gregson-Williams selection, but this may be recommended only for fans of the composer who are completists, as I can\'t say its worth purchasing the release for five minutes of his music. The rating would be higher if it was simply for the score itself, but as the entire contents of the album needs to be taken into consideration, having so many pop standards which can be found elsewhere and also consistently on the radio brings the overall rating down.